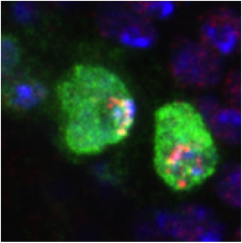 Different variants of the cell cycle can coexist in developmentally regulated cell lineages. These variants can be associated with special moment of the lineage (such as cell cycles without G-phases observed during rapid cell proliferation) or with different programs of cell differentiation (such as endocycles characterised by repeated rounds of DNA replication without intervening mitosis harboured by terminal cells having a high metabolic rate). These cell cycle variants result from the modification of the canonical G1-, S-, G2-, M-sequence and it has been proposed that they are due to restrictions in the mechanisms underlying the canonical cell cycle. For instance, the mechanism underlying endocycles is currently viewed as a canonical cell cycle in which mitotic cyclins have been shut down. In order to test this hypothesis, we have studied the mechanism that allows the emergence of endocyles in the outer cells of the bristle. We focused our analysis on CycA, which has been described to function exclusively during mitosis in Drosophila. We found that both CycA loss and gain of functions induce changes in endoreplication dynamics and reduce the number of endocycles. Furthermore, we observed that CycA controls the subnuclear localization of ORC2, a member of the Pre-RC complex involved in the replication machinery. These results show, for the first time in Drosophila, that CycA is involved in endocycle dynamics in Drosophila. In addition, contrary to current belief, we show that CycA is not involved exclusively in mitosis and that CycA also controls DNA-replication. Finally, our data show that the control of endocycles by CycA is associated with subnuclear relocalisation of pre-RC complex members. Our work suggests that the mechanism underlying endocycles, and a fortiori the other cell cycle variants, involves a remodelling of the entire cell cycle network rather than a simple restriction of the canonical cell cycle. This work was performed in collaboration with Dr. S. Campbell (University of Alberta, Canada) and it has been published (Sallé J, Campbell SD, Gho M & Audibert A. (2012) Development, 547-557).
Back