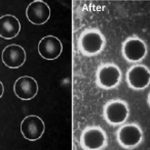 In developmentally regulated neural lineages, progenitors generate different cell types in stereotyped order. We are interested in how neural progenitor identity changes over time to generate different type cells. It has been proposed that progenitors undergo progressive restriction in their capacity to give rise to determined daughter cells. Based on the hypothesis that the mechanism that controls changes in progenitor competence is transcription-based, we have undertaken a study of this mechanism using an original experimental approach. This approach involves an analysis of the transcriptional profile of bristle precursor cells that are laser-microdissected from fixed tissue at specific times of development. In order to test the feasibility of this approach, we carried out an experimental pilot program, in which, we compared the RNA profile of pI versus epithelial microdissected cells. Transcriptome analysis of these microdissected samples revealed that genes that exhibit a 2-fold or greater expression in pI cells versus epithelial cells were mainly associated with Gene Ontology (GO, www.geneontology.org) terms related to cell fate determination and sensory organ specification. Conversely, among GO terms that are significantly underrepresented and, as a consequence, enriched in their sibling epithelial cells, we found cuticle development and epithelium morphogenesis. Finally, we found that several genes known to be expressed in pI cells by independent procedures, such as pebbled/hindsight, scabrous, miranda, senseless and cut, are preferentially detected in laser microdissected pI cells rather than in epithelial cells. Our results show that it is possible to qualitatively and quantitatively discriminate specific gene expression in pI versus epithelial microdissected cells. Taken together, our data confirm the feasibility and specificity of the laser microdissection technique to extract and amplify mRNA from identified Drosophila sensory organ cells. These very promising studies are the subject of a published manuscript (Buffin E & Gho M (2010) PLoS ONE 5(2): e9285).  Finally, the successful characterisation of the transcriptional profile of well identified precursor cells at a precise moment of development opens multiple domains of research. In particular, this analysis can be expanded to identify the genes responsible for a given cell identity, to analyse mechanisms by which a cell maintains its mitotic potential or by which it enters into a post-mitotic state and to understand the cellular response to a determined signalling pathway. Thus, the development of a procedure combining laser microdissection of defined precursor cells and transcriptome analysis represents an undeniably important technical advance for the analysis of biological processes.
Back