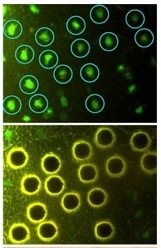 Notum dissection
The notum from neuralized-GAL4 UAS-mCD8::GFP pupae were dissected out in cold PBS and fixed in cold absolute ethanol for 10 minutes. Three to five fixed nota were transferred directly from ethanol with a Pasteur pipette and then carefully flattened and dried with the epithelium facing down on a thermolabile membrane slides for laser microdissection. For better RNA yield and integrity, we dissect, fix, and mount the tissue just before microdissection.

Laser microdissection was originally realized on a MMI cellcut microdissection system coupled to an Eclipse TE-2000 inverted fluorescent microscope (Nikon Instrument). The parameters used were: focus 40, speed 1, power 74 at objective 60X. The SOPs expressing GFP were circled manually by using a circle radius of 9 m. We took care to leave space between the laser circle and the cell border to preserve RNA (around 5 m). Selected areas were cut from the tissue by an UV laser beam. Four to height laser rounds were required to cut through a notum. The success of the cell capture was visually confirmed by the gaps in the tissue (Figure). We collected around 20-50 cells on a cap, 20 l of extraction buffer was put directly on the cap of the tube, and then the tube was store at –80°C upside down. We pooled around 20-40 tubes to proceed to the RNA extraction. Thus, we collected around 800 SOPs for one RNA sample.

RNA Extraction and Amplification
Total RNA was extracted from microdissected cells by using the picopure RNA isolation kit (Molecular devices - Arcturus) following manufactures instructions with minor modifications as described below. We incubated the tubes containing microdissected cells with 20 ml of extraction buffer at 42°C upside down for 30 min. Then, after centrifugation, the extracts pooled were passed through a single RNA purification column. During purification, we treated the column with DNAse I (Qiagen) for 30 min at room temperature to avoid genomic DNA contamination. We obtained 0,1–0,5 μg of total RNA from a sample of 1000 microdissected cells. After extraction, RNA was amplified by using the Message AmpII aRNA Amplification Kit (Ambion). We proceeded with two rounds (9 h each) of in vitro transcription. After each round, the RNA purification column was treated by DNAse I (Qiagen) for 10 min at room temperature before aRNA elution. For better RNA integrity, we carried out all the amplification processes in one step directly after RNA extraction to avoid freezing the sample. Indeed, in addition to the usual recommendations about manipulating RNA, we avoided, as much as possible, freezing both the tissue before microdissection and the RNA samples between extraction and amplification. After two rounds of amplification, we obtained 20–50 μg of aRNA from a sample of 1000 microdissected cells.